WASHINGTON D.C. – In celebration of Filipino American History Month (FAHM), Embassy personnel participated in a historical walking tour around the District of Columbia curated by Mr. Erwin Tiongson of Philippines on the Potomac DC, and partnered with the US Navy National Museum for a special museum tour through October 2022.

FAHM is annually celebrated in the United States in October to commemorate the first recorded presence of Filipinos in the continental United States. The Filipino American National Historical Society (FANHS) introduced this in 1992 and the U.S. Congress officially recognized October as FAHM in the U.S. in 2009.

Philippines on the Potomac Walking Tour

Embassy personnel that were recently assigned to the Embassy and those who arrived at the height of the pandemic participated in historical walking tours with Mr. Erwin Tiongson on 07 and 24 October. The tours gave the Embassy personnel deeper appreciation about PH-US relations and the historical significance of the nation’s capital in relation to the key figures in Filipino history.

The Philippines on the Potomac (POPDC) Project is a historical walking tour curated by spouses Mr. Erwin Tiongson and  Mrs. Teresa G. Carandang-Tiongson. It is composed of the places in the DC area that had some significance to Philippine-American history and culture. POPDC has currently identified two hundred and fifty (250) sites from ten (10) sites when they started the project  in September 2012.

In 2021, the Philippine Embassy together with POPDC created a map for a self-guided tour of downtown Washington. Some of the important landmarks of Philippine-US history are the Philippine Chancery, Cathedral of St. Matthew, Eisenhower Executive Office Building, Bernard Baruch Bench, the White House, among others.

The map may be accessed through the Embassy’s official Facebook page or  https://tinyurl.com/POPDCmap.

Tour of the National Museum of the U.S. Navy

This special tour was organized following the Museum’s very first celebration of FAHM. The museum first celebrated FAHM with a panel discussion titled From Stewards to Flag Officers: Filipinos in the U.S. Navy which was held on 19 October 2022.

Established in 1961, the National Museum of the U.S. Navy is the flagship museum of the US Navy, and is one of 14 Navy museums throughout the country. It  is the only one that presents an overview of U.S. naval history. Both its permanent and temporary exhibitions commemorate the Navy’s wartime heroes and battles as well as its peacetime contributions in exploration, diplomacy, navigation and humanitarian service.

Some of its collections that are significant to Philippine-US history include: 1) Escape from Manila Bay; 2) photos taken during the invasion of Leyte in the Philippines on October 20, 1944; and 3) a photo of Captain Jesus Villamor, the first Filipino hero to receive the high award of the Distinguished Service Cross conferred by General Douglas MacArthur in December 1941.

Further information on the National Museum of the U.S. Navy may be found through its website: https://www.history.navy.mil/content/history/museums/nmusn.html. ### 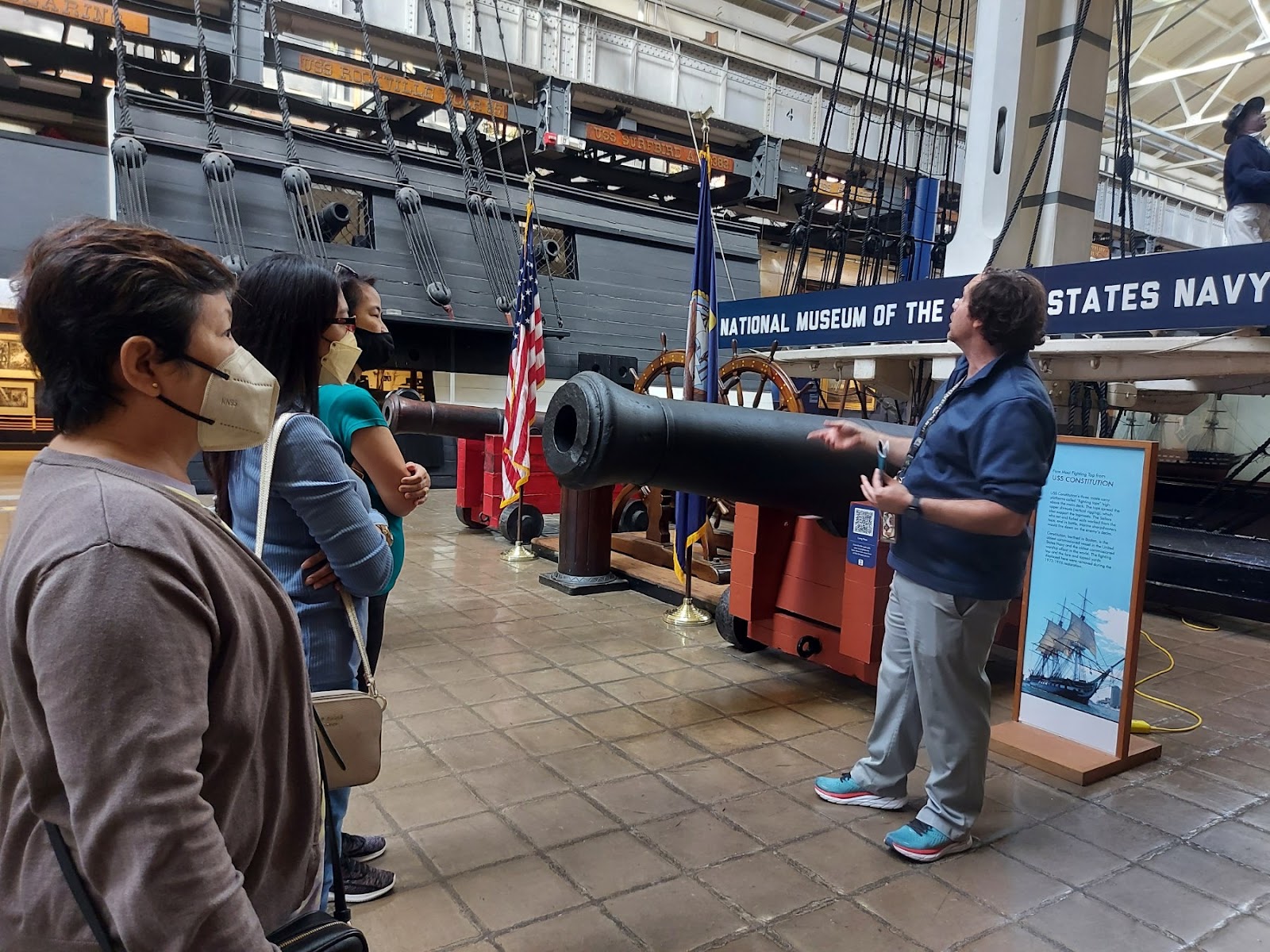 Special tour of Embassy personnel at the National Museum of the U.S. Navy on 22 October 2022 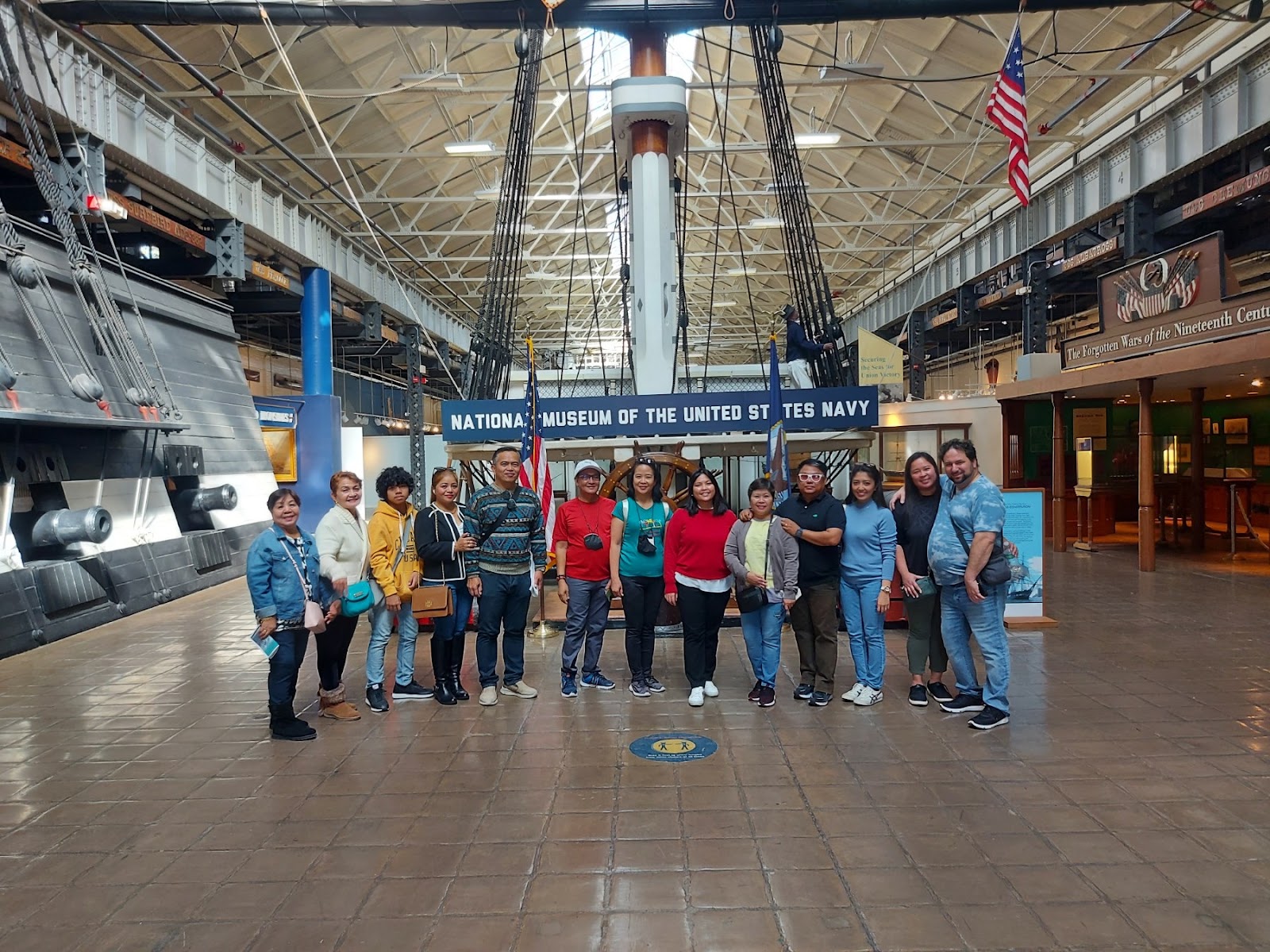 Participants to the special tour of the National Museum of the U.S. Navy 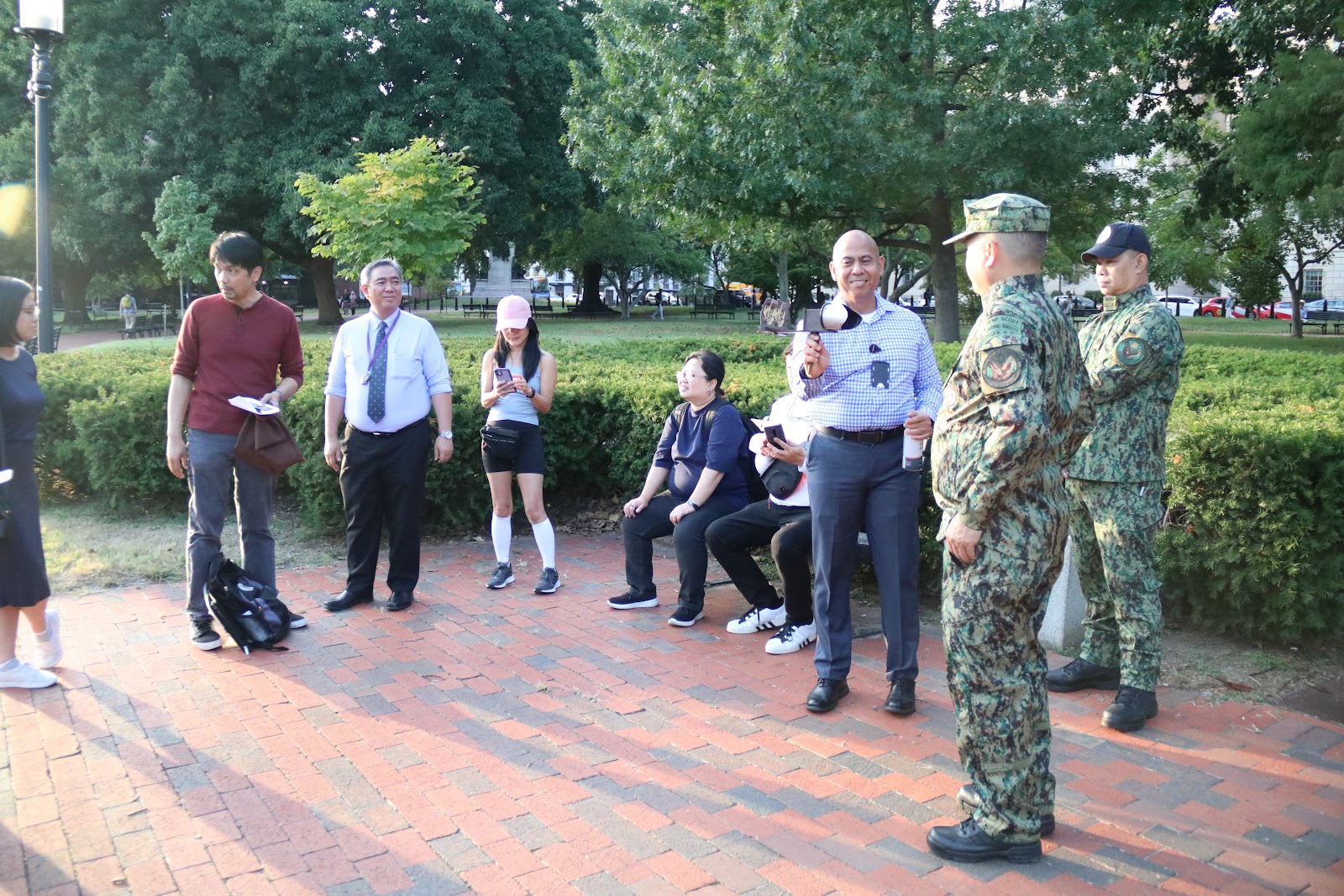 Participants to the Philippines on the Potomac Walking Tour with Mr. Erwin Tiongson (second from the left) examining the antique oculus eye frame while discussing the life and works of  Ms. Sofia Reyes De Veyra. 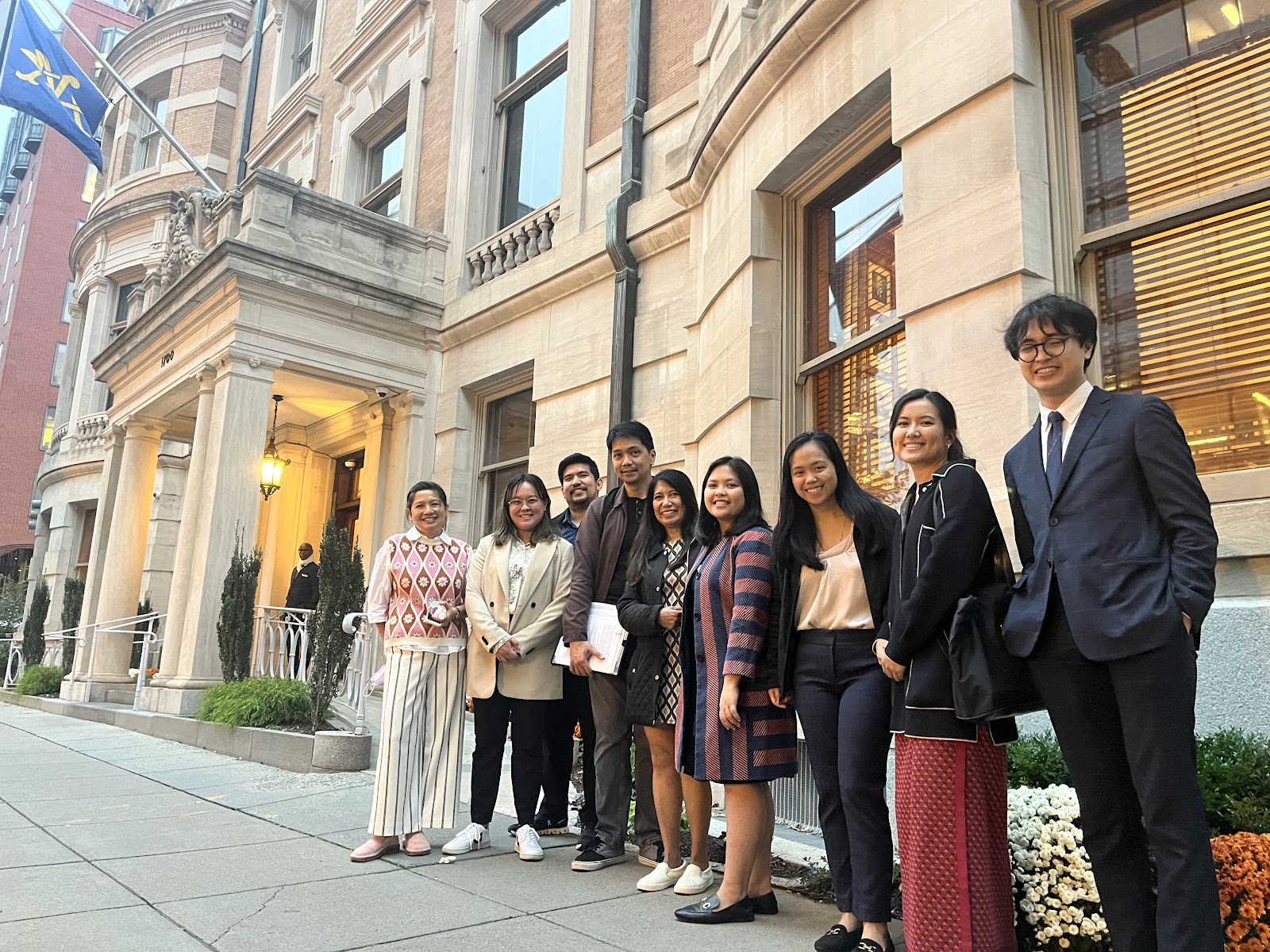 Second batch of participants to the Philippines on the Potomac Walking Tour with Mr. Erwin Tiongson (fourth from the left) as they end their tour at the Metropolitan Club DC. 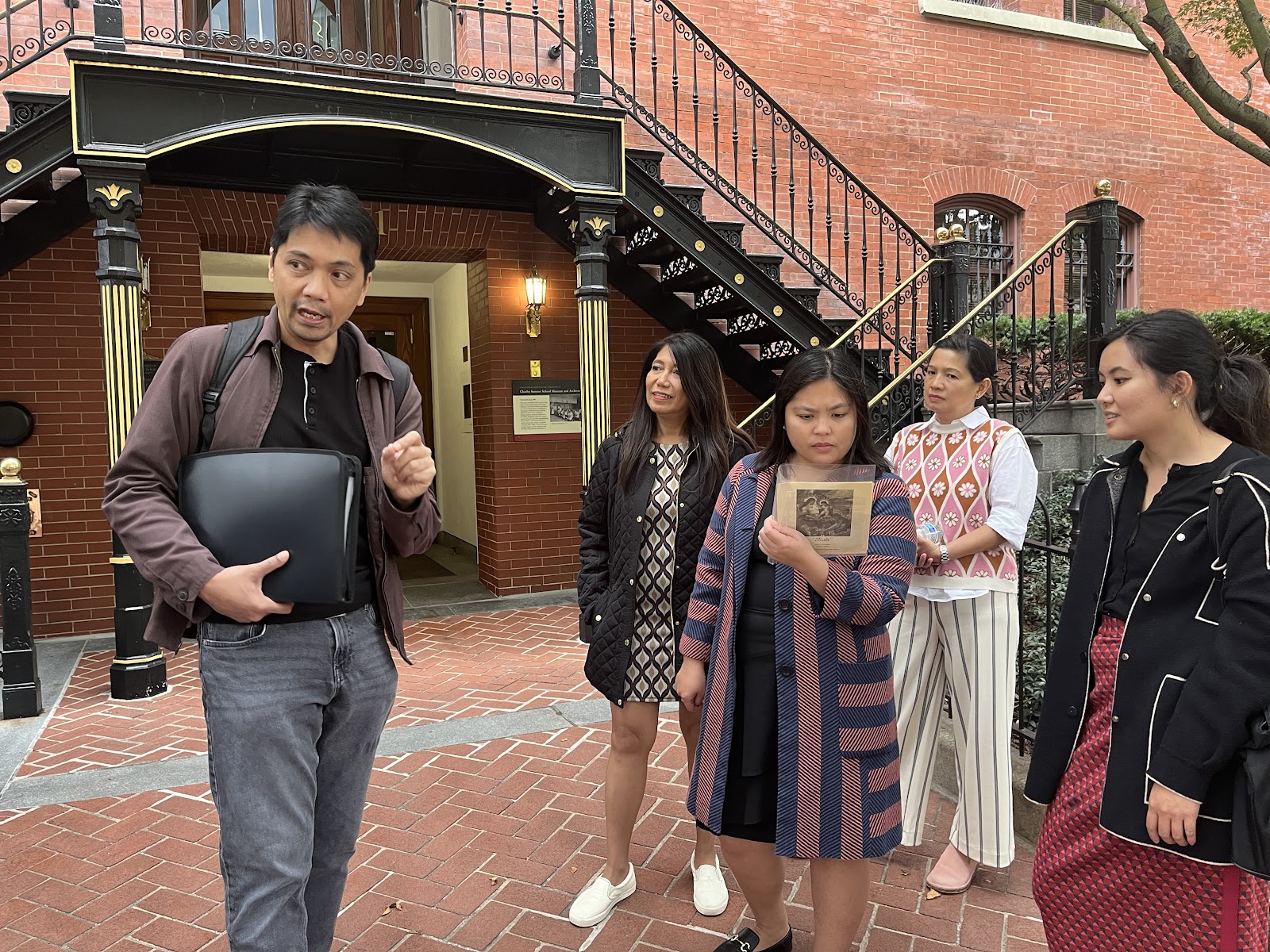 Mr. Tiongson discussing the life and works of Mr. Galo Ocampo in front of the Charles Sumner School. 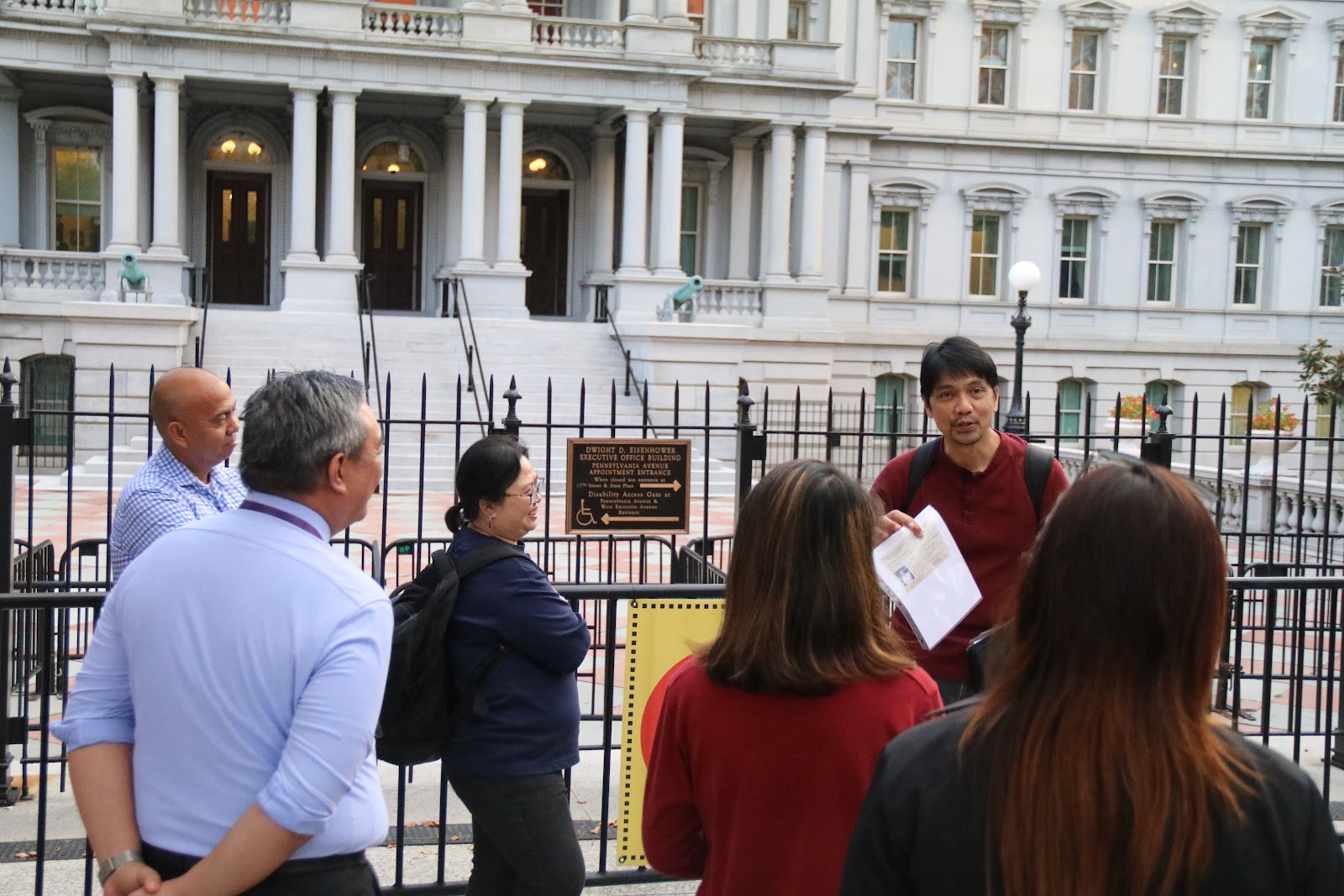 Mr. Tiongson tells the story behind the cannons from the Battle of Manila Bay displayed in front of the Eisenhower Executive Office Building.